We remain immersed in the revolution that LED has supposed in lighting world. Once the threshold of the Lm / W and a CRI homologated to the previous sources of Light has been exceeded, SSL lighting opens new paths to continue evolving.

In this post we will address the ability to customize the chromacity of LEDs. As you should know, the white LED is actually a very effective blue LED covered with a phosphor layer. This match absorbs part of the energy of the blue LED and attenuates bands ranging from green to red, through yellow.

The modification of the Phosphorus formula or the blue LED emission band allows us to obtain multiple chromatic results. In this way, the light source is customized according to the application.

Until very recently LED manufacturers were able to cover the Planck curve in the CIE 1931 chart. The following image shows this. 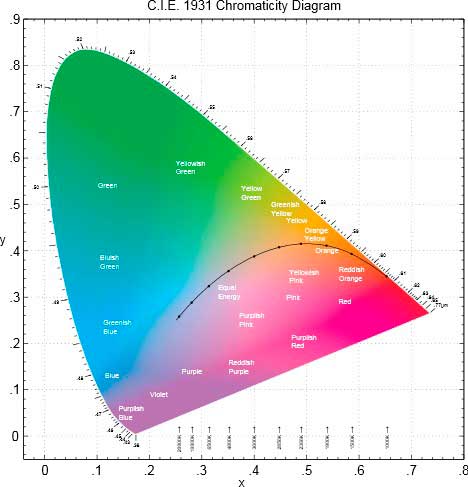 This customization capacity permit manufacturers to develop devices with features adapted to specific needs. This ranges from chromatically adapted LEDs to LEDs with a theoretical CRI 100. Markets range from the world of retail, horticulture, offices, and museums to a long etcetera.

Respecting the Planck curve is not an essential requirement for many applications that require specific colours to be enhanced. Multiple manufacturers have developed LEDs with chromatic characteristics aimed at highlighting the appearance of consumer products. As an example we can take the STYLIST family of Lumileds.

This family of devices ranges from COB LEDs to encapsulated 3014. As you can see in the image shown below, they have moved outside the Planck curve to improve the perception of the food product by the consumer. 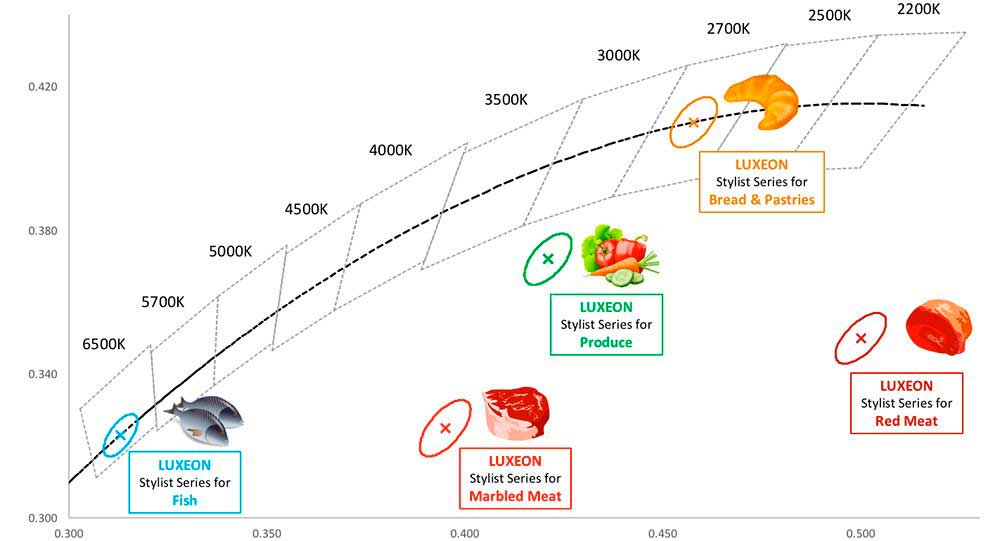 In the following graphic, you can intuit how the LED manufacturer has tried to complement the chromacity of each of its references. 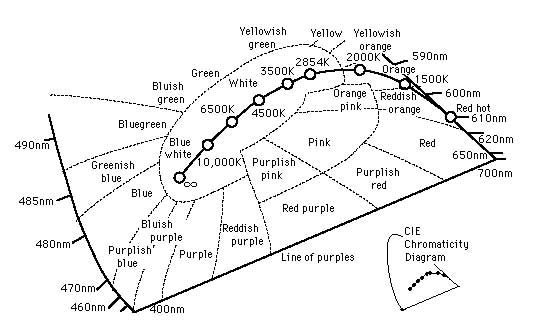 Another device developed by Lumileds is the CRISPWHITE family. This type of LED is aimed at enhancing the white colour. For this purpose they have added violet light (410nm) to the LED emission spectrum along with a high CRI, improving consumer perception. You can see a comparison below.

LED technology is proving to be the most adaptable of the existing ones so far. This adaptability is being used to obtain solutions that replicate sunlight or at least, that resemble.

One of the first consequences is to improve our perception of the environment, as well as improve our quality of life. We must not forget that most of our time we are subjected to artificial light.

Various emerging proposals are moving in this direction opening a new way of working. These solutions sacrifice the efficiency obtained by the LED, but it is also true that they improve the luminous quality of the luminaire. Likewise, the cost is higher, but as has been shown that will change as the consumption of this type of LED increases.

There are several manufacturers that are offering LEDs of 95 CRI or higher, but we will focus on 2 of those we consider most significant.

Seoul Semiconductor has introduced its Sunlike family (the name of this LED is clarifying). This family of LEDs starts from a light source that is not blue, but is violet (405nm). This allows to increase the perception of the violet color and a better contrast.

In the previous image you can see the similarity of the LED presented by Seoul Semiconductor and the light emitted by the sun. In all cases, the CCT obtained is much better than usual with current LEDs. The typical CRI of this LED is 95.

An alternative similar to that proposed by Seoul Semiconductor is the Nichia Optisolis Family (image 6). In this case, the primary light source is a blue LED (420nm). This solution obtains a minimum CRI of 95 and an lm/w slightly higher than the previous proposal.

The most significant difference between the two proposals is the LED emission frequency (405nm or 420nm). In any case, both solutions seek to expand the emission ranges in order to obtain a better colour rendering.

All the proposals that are emerging place special emphasis on the concept of “Human Centric Lighting”. Even so, it is not clear what is most suitable for the human / user.

Each manufacturer argues differential attributes that make its technology the most appropriate for its use. In what does all the studies seem to coincide is that a prolonged exposure to blue light creates risks to our health, especially in the hours before night-time rest.

But we must also consider that the blue light helps us to activate and maintain a state of attention. Do not forget that sunlight changes spectrum throughout a day, generating different colour temperatures and with different amounts of light.

In white commercialized LEDs, the blue LED emits between 415-455nm, creating more visual fatigue those of smaller nm (most manufacturers emit in 440-450nm).

Taking into account this feature, LG has presented an LED (called “Eye-Pleasing” LED / image 7) that generates white light but from a blue LED with lower energy (465-490nm). This device is designed to avoid visual fatigue generated by prolonged exposure to artificial light. It is not a device that aims to obtain a high CRI. 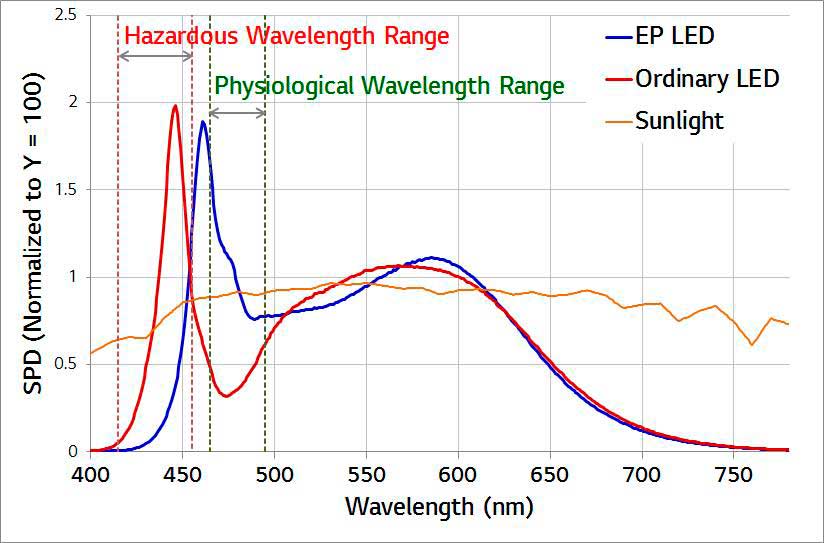 Like any business activity the Lighting industry is moving towards a user-oriented improvement and to perception of the environment. One of the areas of knowledge where all companies are working is the HCL (Human Centric Lighting). Multiple studies have started in parallel allowing us to discover how to make lighting healthier.

For a long time, the impact of light on our health and our environment has been analysed. It is known that excessive exposure to blue light reduces Melatonin secretion, causing problems of various kinds (sleep disorder, diabetes, obesity, etc.). This characteristic must be taken into consideration in time periods close to the rest hours.

In urban lighting devices (only night work), new lights are more environmentally friendly, avoiding excessive blue light emission (amber or 2,700 / 2,200K lights are installed). The objective is to reduce light pollution and minimize the impact on the natural environment.

The adaptation of lighting to the circadian cycle is another matter on which multiple studies are emerging.

Of course we can say that LED will allow us to improve the lighting due to its transformation capacity. This forces us to be attentive to the LED solutions that are presented by the manufacturers and the future studies that are published. We keep moving forward.

SOLERTEX PROJECT: A photovoltaic fabric for umbrellas and sunshades 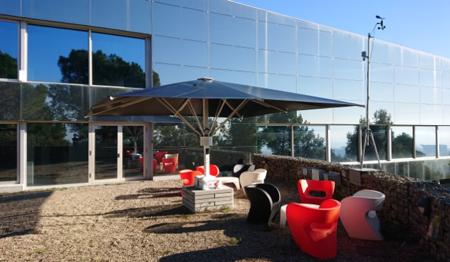 This website uses its own cookies and third-party cookies to collect information in order to improve our services, as well as to analyze your browsing. If you continue browsing, it means acceptance of the installation of them. The user has the possibility to configure his browser, if he wishes, to prevent them from being installed on his hard drive, although he must take into account that such action may cause navigation difficulties on the website.

Tell us your idea!